Eeps! That overly dramatic french greeting was only intended to break the monotony from my previous post greeting style. I'm sincerely not learning it for my new designation at Renaissance Lucknow Hotel (prancing :p). Many of you who follow me on various social media platforms already know that I recently grabbed the opportunity to be the Exclusive Ambassador for the newly opened RENAISSANCE LUCKNOW HOTEL. Its surreal to me tbh! Tons of thanks to the DFB, Mr. Sandeep for reaching out to me and being sweet AF.

So, its no surprise that today's post is all about the KAKORI FOOD FESTIVAL that I experienced during my first visit to the Awadhi restaurant, namely SEPIA at Renaissance, recently! I've been hyping it all over my Facebook since so many days. 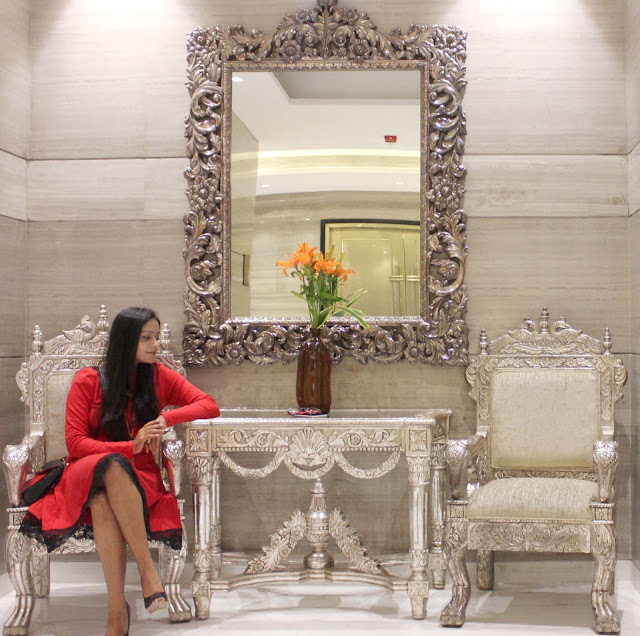 In September 2015, Renaissance by Marriot opened its first luxury hotel in Lucknow; and maintaining the authenticity of the city, Sepia - the restaurant was opened in December to serve the best of Awadhi dishes to its nawabs! On a special visit to Sepia last Sunday I experienced an amalgamation of pride, mysticism and glory.

The Kakori Food Festival organised by the food & beverages team was all about the cuisine of Kakori showcasing its local ingredients, taken to a new level of sophistication with a strong emphasis on Royal Mughlai cooking techniques, used to create truly exemplary dishes. I was already swayed by the presentation they laid in front of me!

PS : The fest is UP TILL 12TH JUNE, so you can actually go and experience it yourself. 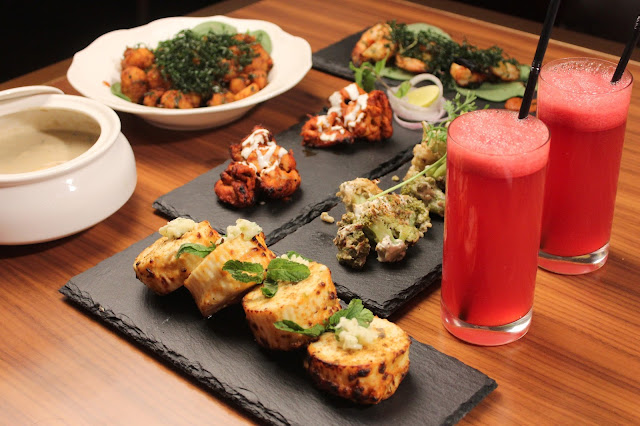 I, along with my friend and photographer Azman Khan, tried various Awadhi delicacies prepared exclusively by Chef Mohsin Qureshi - the Sous Chef at Renaissance Lucknow. Excelling as an expert in Indian Cuisines by developing creative menus/recipes as per global standards and having worked with globally renowned hotel chains, Chef Qureshi has grasped the fine nuances of Indian cuisine in just over a decade of his professional life and also had the privilege of working on the menu for Pakistani President Mr. Asif Ali Zardari (isn't that so cool?).

Apparently, Chef Qureshi prepares the authentic Awadhi speciality dishes such as the popular Kakori Kebabs, Galawati Kebabs, Parda Biryani and Raan and has also created innovative vegetarian delicacies such as Jaitoon aur Khubani Bhara Khumb & Sarson ke Phool. Another highlight on his menu is the Murgh Mussalam – a whole chicken that is stuffed with chicken mince, liver and nuts finished with brown onion and nutty gravy. Being a vegetarian, it killed me inside to not be able to even taste this bit, but that's alright because he prepared some yummy vegetarian dishes for me and fed my friend all his non-vegetarian specialities! 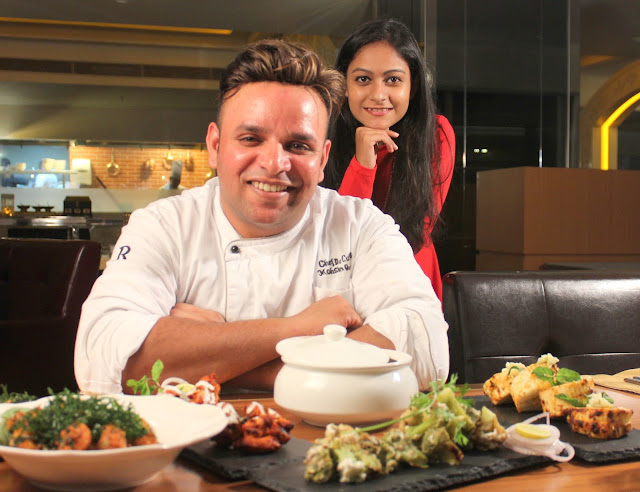 It wouldn't be wrong if I say, I tasted some of the best Kakori cuisine of my life till now, at Sepia. I'm sure you're already getting jealous looking at the scrumptious food pictures, but trust me we were literally drooling while clicking the pictures before our dinner was served!

Tons of dishes to choose from, our VEG STARTERS menu included : 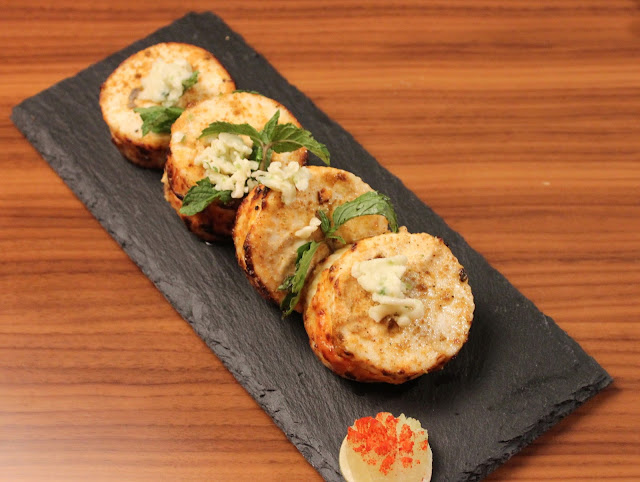 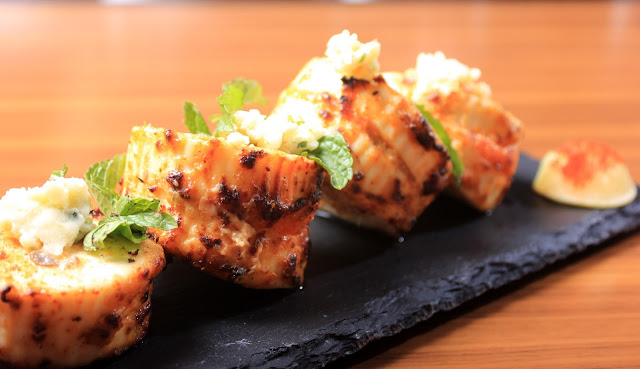 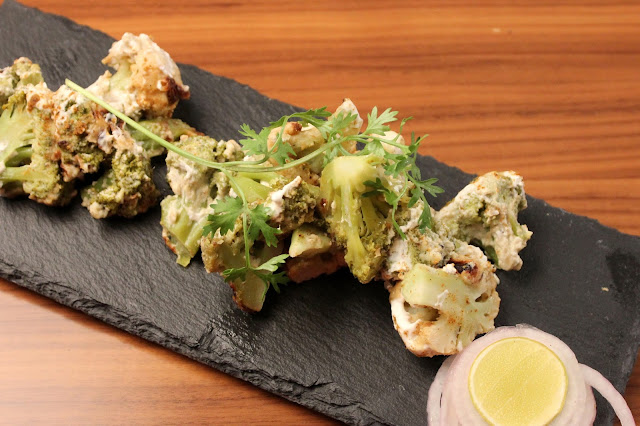 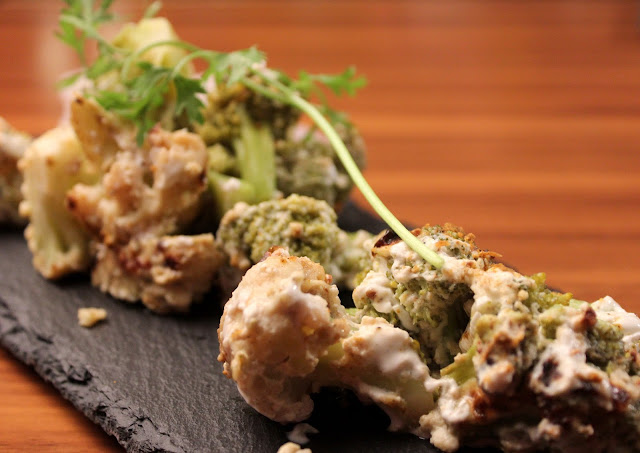 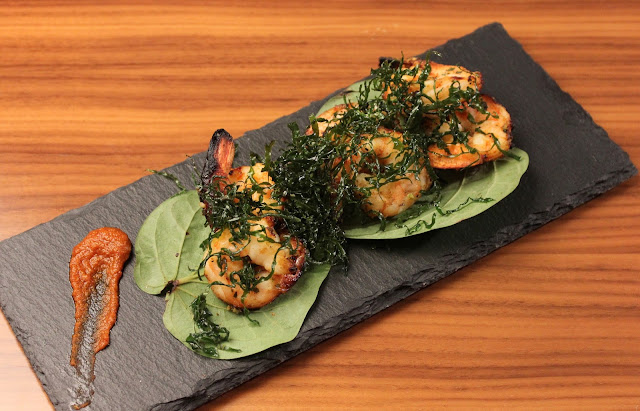 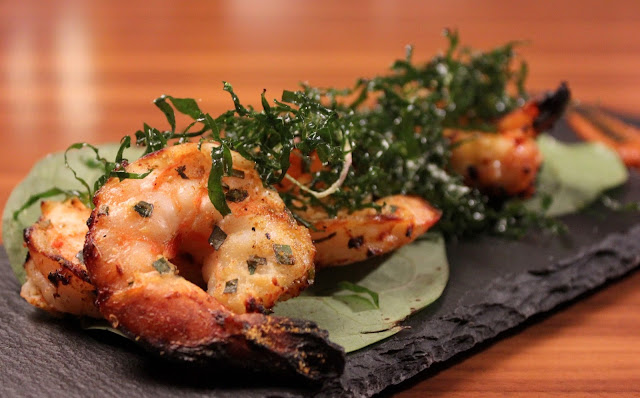 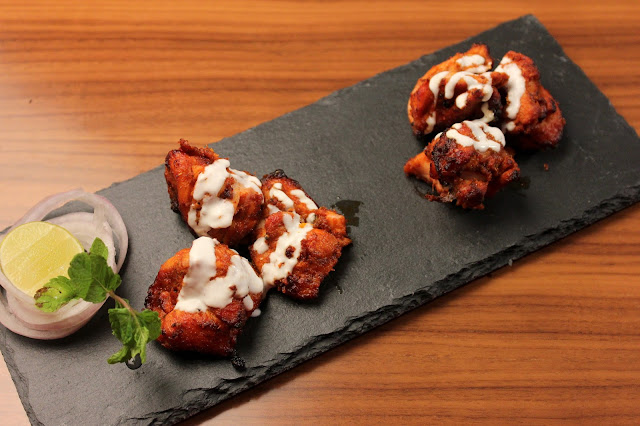 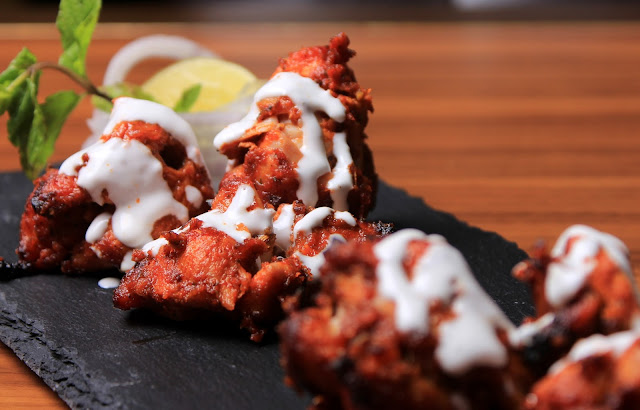 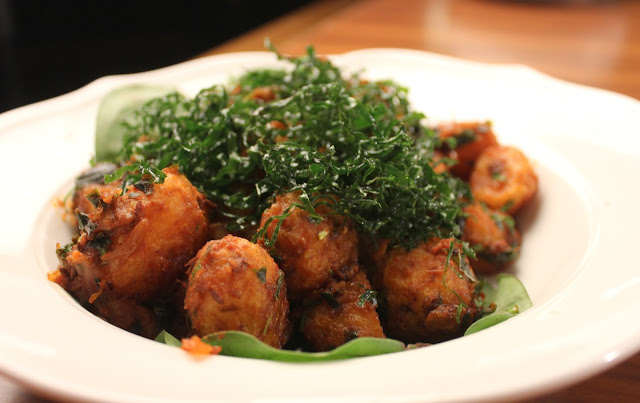 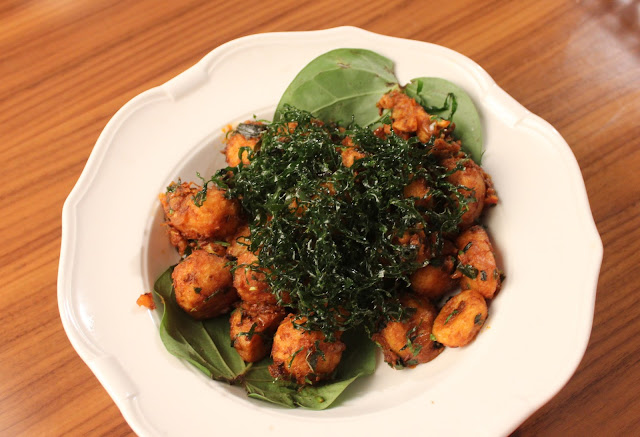 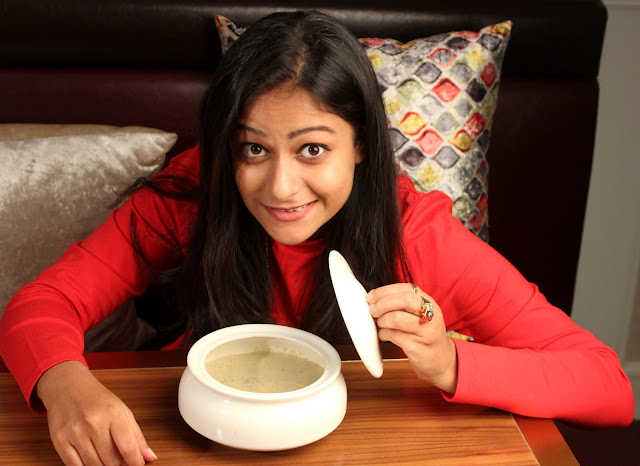 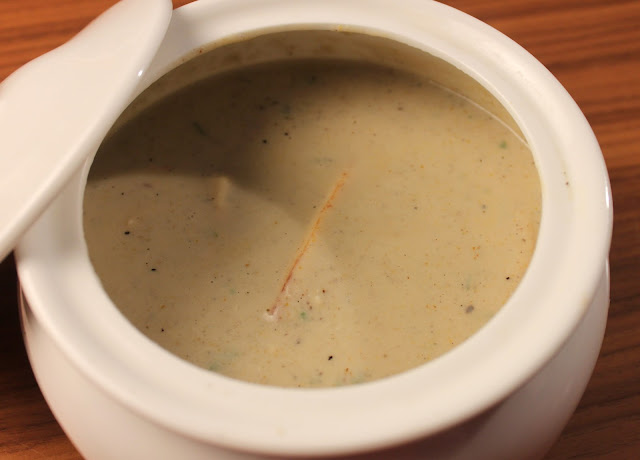 We also had BHUNEY BAIGAN AUR MATAR which is basically a dish made of tandoor roasted aubergines and green peas, and apparently it was the BEST eggplant side dish I've ever tasted. Yes, I did compliment the same to the chef! :D

For the vegetarian specialities, I can very well say that all the dishes both from the starters and main course menu were exquisite and delectable. As I mentioned above, the Baigan sabzi was my favorite and I also liked the Aloo Paan combo considering I had it only for the first time! I would though say that while clicking the pictures, Moradabadi Paneer Tikka seemed to be the most appetising, but after tasting it in real I didn't like it as much as others, majorly for two reasons, 1.) It was cold when it reached us 2.) Thus becoming hard and unpalatable.

Whereas for the non vegetarian menu, in Azman's words : The starters were fabulous. Special mentions - Maghai Paan Jheenga, that both looked and tasted divine! Coming to the main course, Malihabadi Chicken was one of the perfect tasting dishes that one could ever get. A bit savoury, leaving a tangy aftertaste, perfectly cooked till inside giving you the feel of the traditional non veg from the Pathan clan of Rahman Kheda from Malihabad! Not really impressed with the KKJ Murgh as it had too much mint and onion that over shadowed the other subtle flavours and spices! Last but not the least, the Chukandar Gosht was perfectly cooked till inside, the soft mutton effortlessly went down into the stomach, however containing extra oil and beet root puree (instead of beetroot pieces) that somehow missed the texture of traditional beetroot-y dishes! 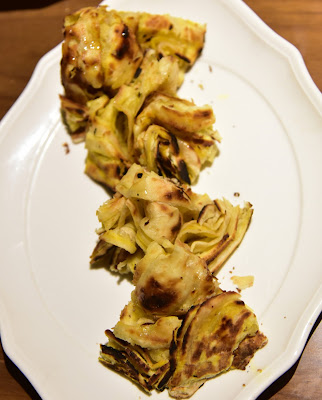 In BREADS we had the very famous WARQI PARATHA and PLAIN NAAN. And we LOVED the Warqi because of its sophisticated crumbled presentation, its softness and its sweet tinch reminding us of the authentic Mughlai flavor in every bite. And just to tell you we ordered it twice; leaving the rest for your understanding! ;)

DESSERTS ON TROLLEY
array of Indian and fusion desserts

We ended our meal with one of the most exotic desserts in Lucknow, the Zafrani Phrini, out of all the desserts laid on the trolley, which looked no less mouth watering! 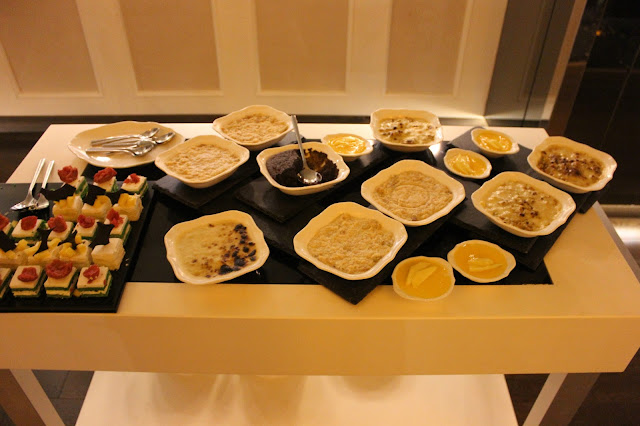 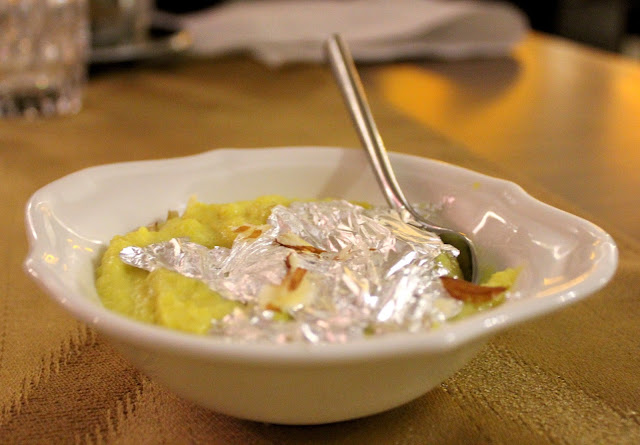 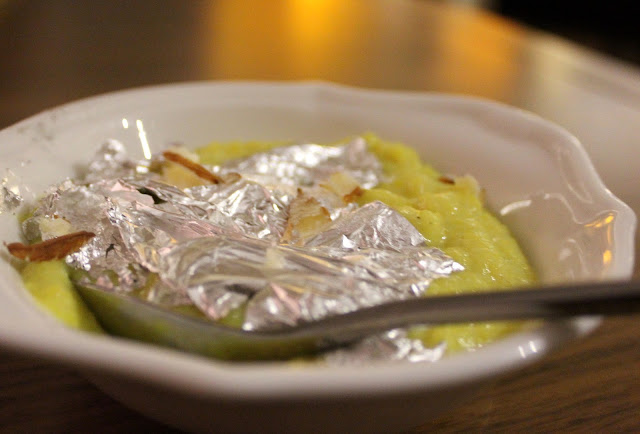 There's a lot more on their menu which I'd recommend all of you to try at least once! I'm sure you'll love it!

It is no secret that Sepia, by Renaissance is the place to savour local cuisine in a beautiful ambience. The restaurant’s interiors and ambience have been done with great detail to make every moment a royal memory that will last you a lifetime! Its one of those contemporary chic restaurants featuring the spice markets style in India bustling cities.

The rustic wooden flooring and clean white walls creating a dramatic vertical design and providing the rural Indian artefacts and the eclectic details on the accent furniture a contrasting backdrop. The outlet color palate is made up of rustic textures colors with inspiration coming from the Indian market.

Highlight of the restaurant was undoubtedly the LIVE MUSIC which is enough to soothe anyone's long, tiring day! Kudos to the singers who sang so well, that I was forced to record them and send it over to my friends on Snapchat bragging all that I was enjoying! 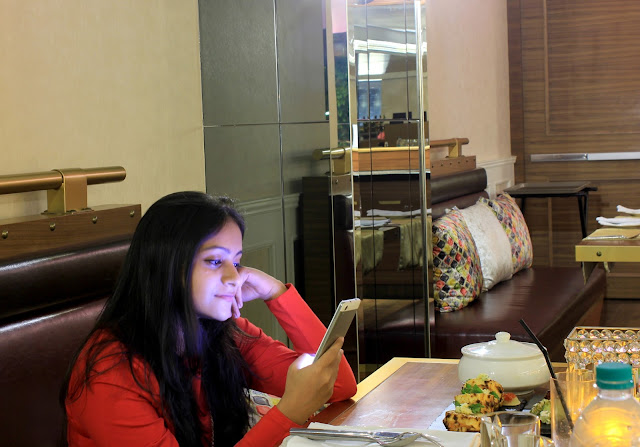 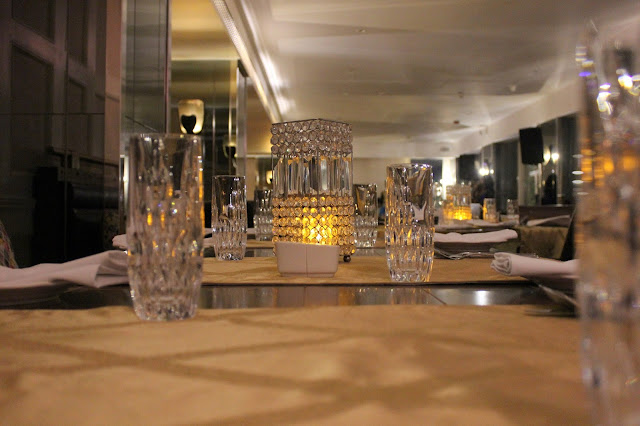 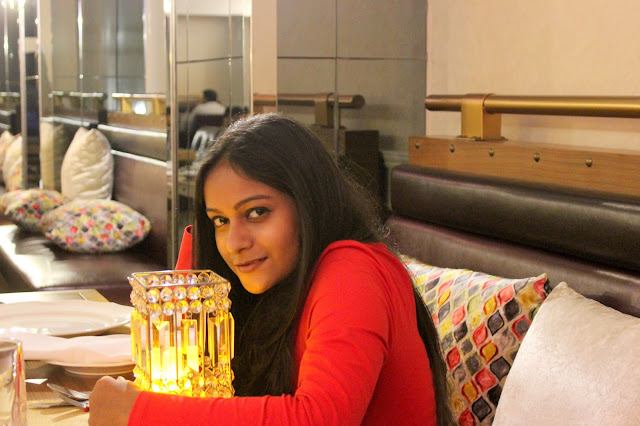 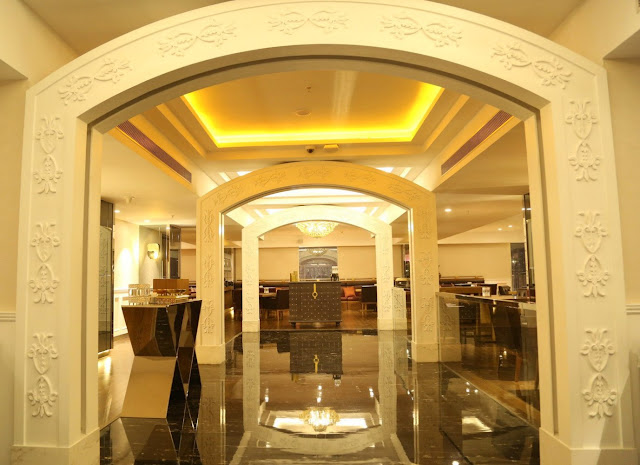 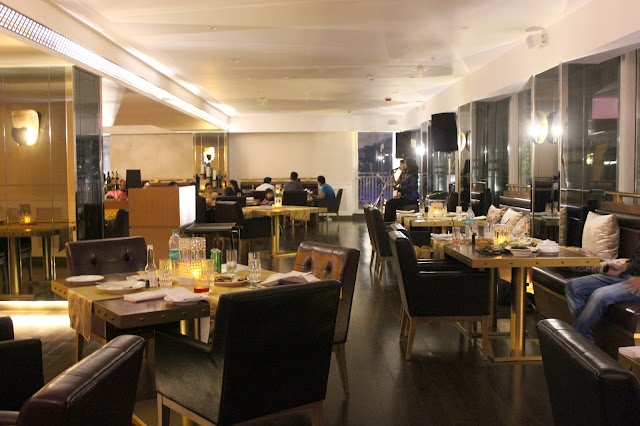 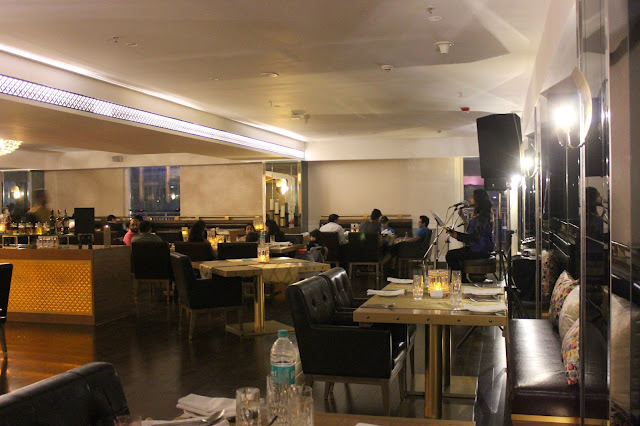 Service - 5/5
(everyone is super courteous and comforting, including the manager, chef, waiters)

Loved the entire experience and looking forward to more!

Since it was my first visit at Renaissance as their Exclusive Ambassador, I thought of dressing up like a lady, unlike my regular visits to other places and wore this pretty red dress from StalkBuyLove, throwing up a chain from Zotiqq, heels from FactoryRush and bag again from SBL. Decent enough, eh? 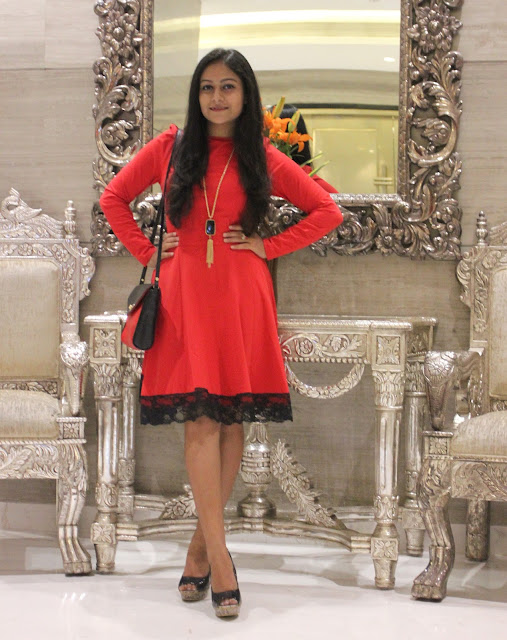 If you liked reading this post, don't forget to share it across! Until next time, lots of love and virtual hugs.