My share of review on Chetan Bhagat's latest novel - HALFGIRLFRIEND

I am not a books person, not a reader AT ALL. Its hard to even recall when did I last read & completed a book, except ofcourse my textbooks. But there was something peculiar about ‘Halfgirlfriend’..I could over hear people talking about it everywhere I went in the past one month. I was seeing selfies, people took with the book and posted it on various social media sites. I was somehow attracted to it, really don’t have an idea WHY? The other day I was ordering a few textbooks for my course in college from Flipkart & suddenly ‘Halfgirfriend’ popped up showing the view details & price. I clicked on “buy now” option & added it to my cart, telling myself to give it a shot. But an inner voice said to me, Shubhi, are you seriously going to read a book, rather a novel? Will you, seriously? I held my breadth and said, Yes I will. Two days later, I received the book & took a picture of it to post on instagram, telling the world I’m transforming, LOL.The same night I started reading the book at 12 AM sharp. (Sorry to be specific but this time did change something in me, I was reading.) It took me 3 nights to complete the whole book. Well, 3 because I used to read 12AM-2AM every night. Yesterday night I completed the book at 3.30 AM because I didn’t want to stretch it to another night and live in suspense, and posted on twitter saying, ITS ADDICTIVE! Well, I am suppose to write a review on the book, well because many of my non-reader friends have asked me to do so. Gosh! Why can’t they just open up the book and read it themselves, reviews change opinions & perceptions, they do! Anyways, here I go…… 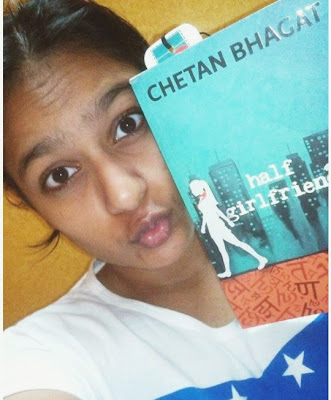 There are two kinds of people in this world – those who like Chetan Bhagat and those who detest Chetan Bhagat. Both these groups ensure that you cannot ignore him.
Starting with the prologue, I wept and wept for 5 minutes continuously. But then I thoroughly enjoyed the read right upto the epilogue. Well, wept again in ACT 2, reading the “6 legible entries” from the heroine’s diary, to be frank.
The character build up has been beautifully done and for the first time , even though the book is from Madhav’s point of view, Riya, the female protagonist, is more central to the story than Madhav himself. The story had its twists, but there was quite a bit of predictability in it too. There were a few things that weren’t quite logical, but logic isn’t what most try to see in today’s books or movies, right? Bhagat always takes up issues which resonate with the masses. In “Halfgirlfriend”, the protagonist is a Bihari guy named Madhav who has a hard time speaking English. Now what can be more common than that? I can envision thousands of youth in Bihar, who will never read “To Kill a Mocking Bird”, but who will readily see themselves in Madhav and will have no difficulty in comprehending Bhagat’s simplistic yet charming writing style. The repeated references to Madhav’s poor English is annoying at times, but almost every book has a phase where the reader fights within himself to either put it down or soldier along. I chose to read on. And the book did hold my attention. Till the last page. And mind you, I am not a girl who reads only Chetan Bhagat novels, infact..I don’t read any authors’. But “Halfgirlfriend” had me hooked. It’s a charming love story. You will end up rooting for Madhav.
There is the inevitable drama. Almost Bollywood like. But it is Chetan Bhagat we are talking about. This slightly surreal drama is Bhagat’s style. And it’s good. He has his own niche. It’s a different story altogether. Bhagat touches on the problem of rural education in India and the book also suggests ways to improve one’s English. The techniques may seem too raw for the average Goodreads user or a regular reader, but in truth, they are effective. A 15 year boy reading this book in Bihar will understand this more than you and I ever will. One of the pinnacles of the novel encompasses the fact that  the story is also revealed from the perception of the heroine - Riya, though it surfaces through her diary entries. Moreover, the jigsaw method of gluing the broken contours at the end of the novel too is absorbing. Accommodating the Microsoft King - Bill Gates, too  takes to shore the crystalline pebbles of the novel. From one perspective, the novel is yet another amusing Bollywood saga and resembles a bit with the movie English-Vinglish where one tries to conquer the  convolutedness of English language. In the second half, the story traces fragments of Sanjay Leela Bansali movie “Hum Dil De Chuke Sanam”  where the heroine crosses the borders of India in search of her long lost Lover in Italy. One pragmatic point worth mentioning is the guy choosing to work for a social cause, development of better infrastructure and facilities for rural schools; over a high paying MNC job. In a nutshell, Bhagat’s new book “Half Girlfriend” forms a perfect plot for Bollywood flicks.
To end, it was a sweet, simple and convincing story. An inspiration for some students in many ways, because in our generation is more likely to follow the stories in movies or books, so yes its an inspiration for the youth to hold on to the one they love for a lifetime. Also, to enter any reputed college in the country through the sports quota if they have willpower & dedication. But, guys…St.Stephen’s is a hard one.
Overall rating : 3/5

Suggestions : Don't form any strict opinions about the book from any reviews you hear or read. Please go ahead and read the book for yourself! Also, if you have any additions or contradictions to the review, do comment below!