"Once the rice is pudding, it's too late to reclaim the rice!" - Indonesian Proverb

Since I was I kid, every time someone used the word "Indonesia", my first thoughts about the place flashed as an island full of volcanoes, jungles and people eating rice. Or re-framing it, rice always came first because my daddy said Indonesians eat too much rice, so you know why I used that proverb above! PS : I haven't still visited the country but today, several years later I feel incredible writing down this post for you sharing my first experience with the Indonesian cuisine.

So, the food and beverages team at Renaissance Lucknow Hotel put together an amazing Indonesian dinner buffet to gorge upon naming it AYAM : flavours from Indonesia to relish the Awadhi palette, at their L-14 restaurant. I was invited to taste the bit along with my friend Azman like always who reviews the non veg delicacies because I refrain from doing it anymore! Anyway, let's get down to read my take on the Indonesian cuisine as served with love at the on-going Indonesian food festival. 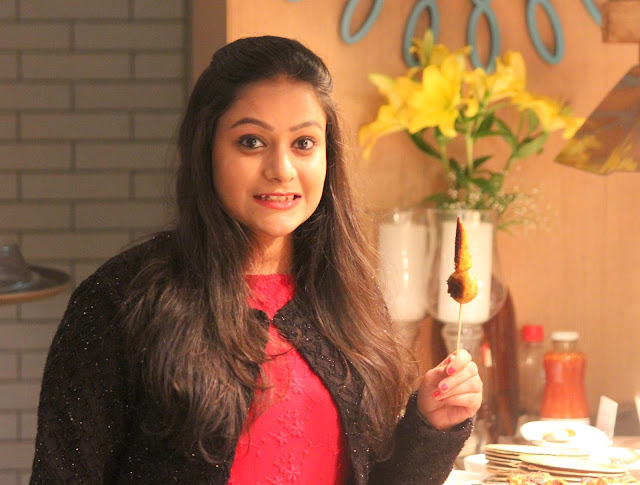 Many of you must already know that Indonesian food is full of colors and flavours, mainly because its indigenous techniques and ingredients have been greatly influenced by other cuisines, including Chinese, Indian, European and Dutch, but has been adapted and modified to suit the local palate. Upon researching, I got to know that there are six main Indonesian cooking methods that are used to prepare the best of meals : frying, roasting, grilling, sautéing, boiling and steaming. With that, I was also told by Chef Balvinder at Renaissance Hotel that Indonesian food is usually cooked in advance and served at room temperature, although there are some dishes that should be consumed hot and fresh from the stove or barbecue - like the 'satays'!


If you now feel excited enough, scroll down to take a quick look at what all I tasted! 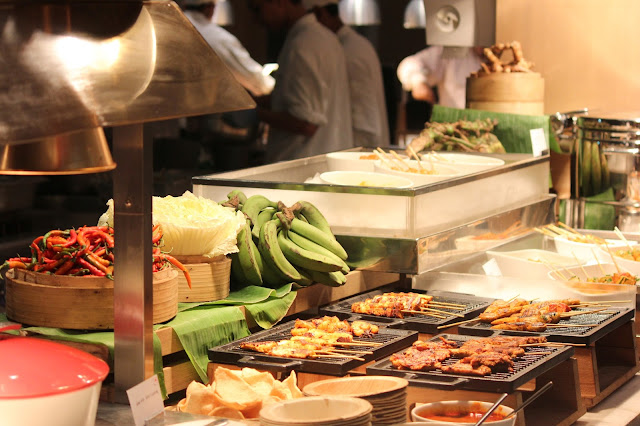 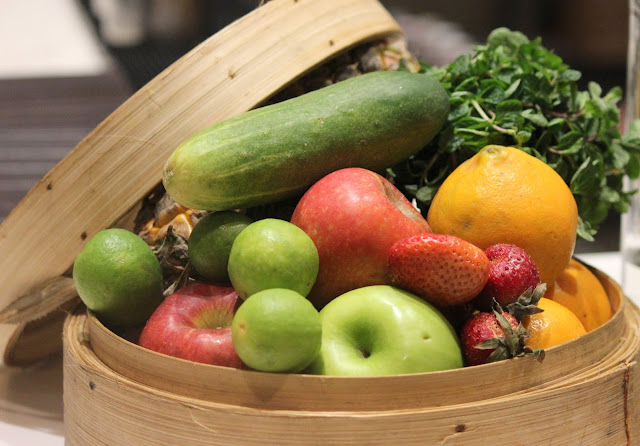 Unlike my other visits at the hotel, this time it was so much more fun. You could say it was so because I dropped in after 3 whole months and everyone greeted me with so much warmth since it had been so long we saw each other. Well, I was served some veggie satays including Paneer Satay and Babycorn-Mushroom Satay first. To notify, "Satay" (or sate as they put in Indonesian spelling) is a dish of seasoned, skewered and grilled veggies, served with a sauce. Its one of the most loved recipe in the cuisine and tbh, I loved it even more. The soft, succulent, grilled satays were a blast of spicy, tangy flavours in my mouth!

Along with that, I also tried the Khow Suey soup which in real is a Burmese dish but it was served with just green onion and one of the world's hottest and Indonesia's favorite pepper as the core ingredient, the Bird Eye Chilli. For all those who watched the coverage LIVE, already know I could just sip like 5 spoons and I was done because man, that chilli was HOT, but tasted yum! 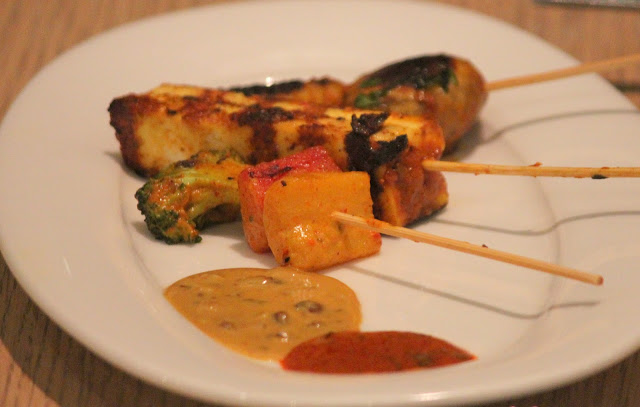 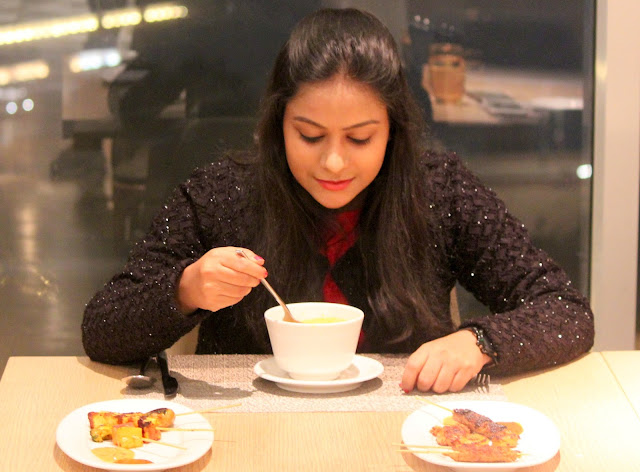 After that real awakening from the hottest punch ever, I really wanted something subtle and hence took some Bani Goreng, also known as Mie Goreng, which is a flavorful and spicy fried noodle dish common in Indonesia, Malaysia, and Singapore. The veggies in there helped me cut down the extra spice from the soup, with some Caponata which is a Sicilian dish consisting of a cooked vegetable salad made from chopped fried eggplant and celery seasoned with vinegar, with capers in a sweet and sour sauce. Too many vegetables for the night, ah!

Let's talk about my favorite for the night - Nasi Goreng, a fried rice dish with vegetables and spices (notably cardamom, coriander, cumin, ginger, onions and garlic), the Spanish chilli, and peanuts. I took some Stir Fried Chilli Basil Vegetable Curry along with it and some Mushroom Fricassee on the side which tasted heaven in white sauce. Rice is the staple food of Indonesians and the aromatic rice they use is unmatchable. Well, I tasted just that! Beautifully soaked flavours in rice with the perfect crunch of veggies. 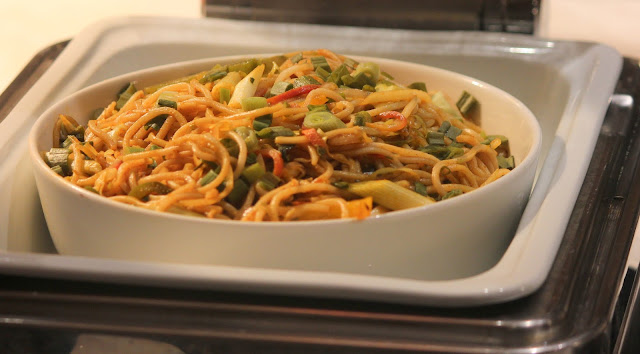 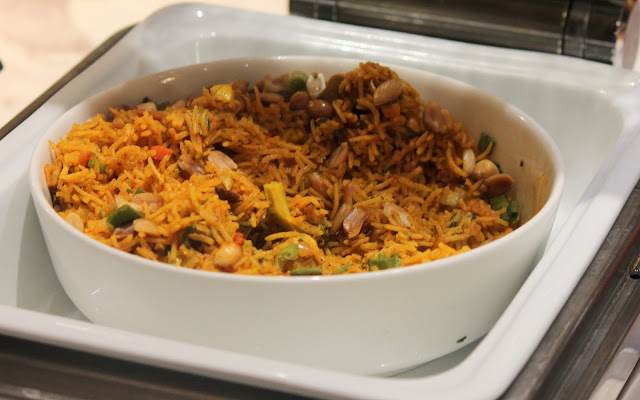 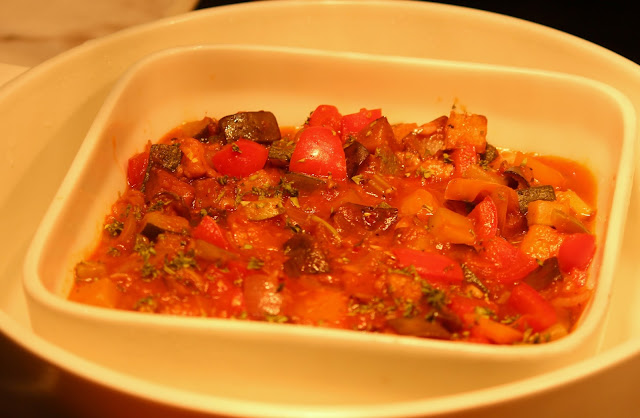 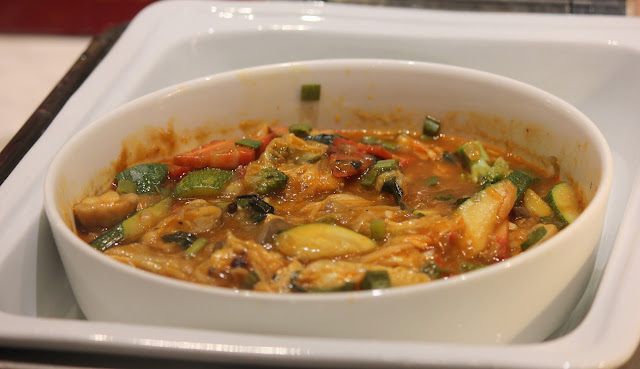 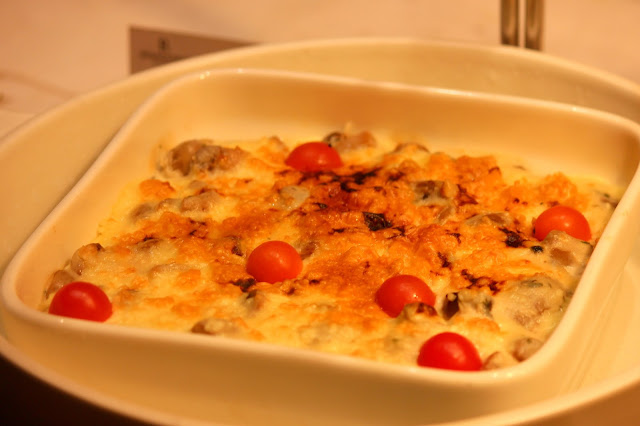 Some aficionados never go beyond the usual Nasi Goreng, Bani Goreng or Satay but for the more adventurous there is a wonderful variety of tasty treats available at this food fest! My first experience with the Indonesian food has been exemplary in real and has provoked me to repeat the entire course (hehe)!

PS : Don't forget to try the delightful tender coconut mocktail blended with orange juice and served in a coconut shell topped with mint and strawberries. 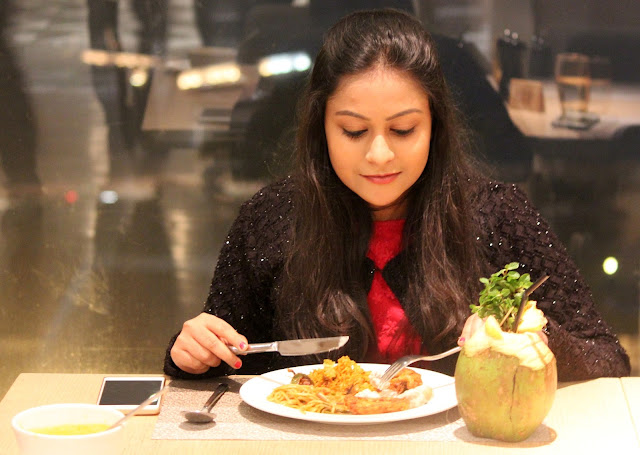 You know, desserts are something I eat before the meal every time, but while writing my posts for you guys, I put it at the last because that's my favorite thing! At L-14, apparently most of the chefs now know how much I love Mahalabia. So much so that I tried the same at other hotel in another city recently and told them its nowhere close to the heavenly dessert I eat at Renaissance. So ofcourse, 3 bowls of Mahalabia to taste, and a Sago Pudding (made of sabudana in and garnished with mango) were my first picks.

The second round of desserts after the meal included some Brownies, Orange Baked Yogurt, Fresh Fruit Savarin, Chocolate Pastry and Meringue. Well, I did a third round too as Chef Balvinder puts it "there's always a side space in your tummy for abundance of desserts", and I was served another bowl of Mahalabia to complete my meal! 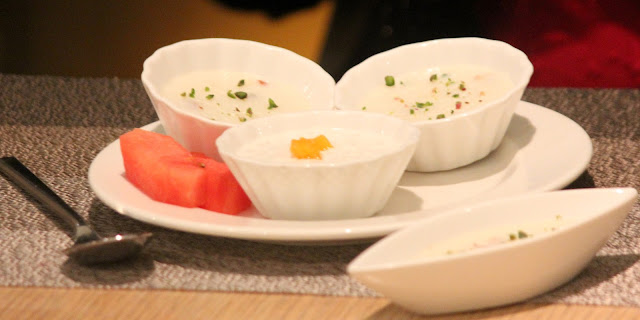 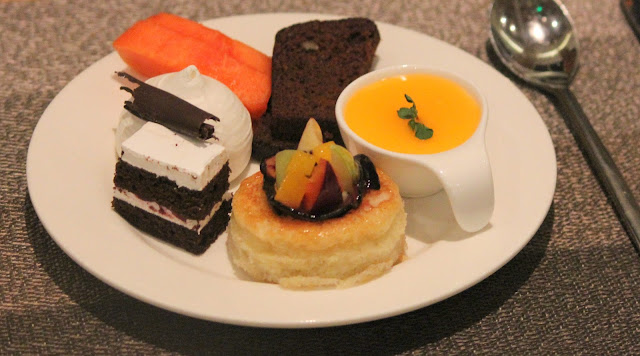 If you liked reading this post, do share it across and subscribe to this blog for all new post updates. And, the Indonesian Food Festival at L-14, Renaissance Lucknow Hotel is up till 12th Feb, 2017. If you're a real food lover, you must go and check it out! Make reservations HERE.